Going the extra mile to give the security of a home

The journey ended down a soft, sun-dried dirt path, where a family stomped mud into the bricks that would soon build their house.

Two women greeted Tanisha and several dozen other volunteers who had made the approximately 100 km drive from Mumbai to the remote village of Chafewadi to build houses as part of the 2019 Seeds of Peace-Habitat for Humanity Young Leaders Build. The women carefully placed the traditional red tikka on their foreheads—their sign of gratitude for the houses they would soon call home. It was an experience that Tanisha said is hard to forget.

“While I was laying the bricks, building the foundation of the house, I felt that we were there to build the foundation for a better life for the entire family,” Tanisha said. “I realized that seeing them happy game me the most joy—seeing the hope and faith in their eyes.” 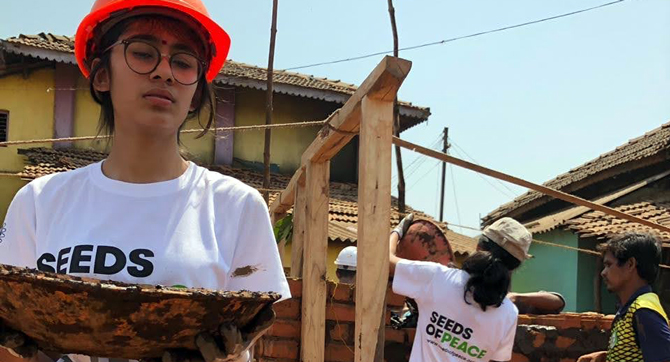 For Tanisha, the Young Leaders Build was the culmination—and also the beginning—of an empathetic journey that included the 2018 Seeds of Peace Interfaith Camp in India and running in the Tata Mumbai Marathon Dream Run to raise money for the houses she would later build. 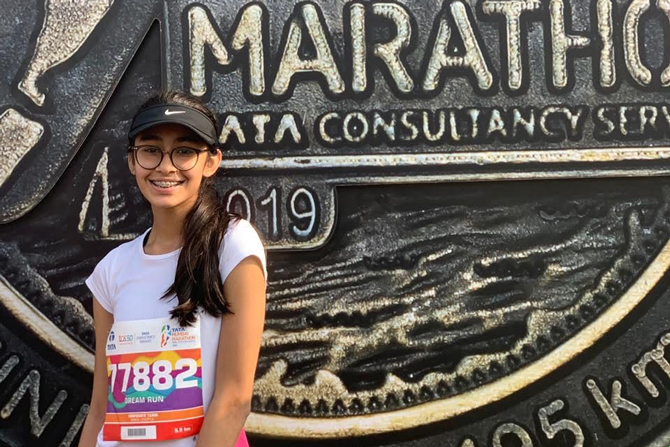 It was a path she literally didn’t see herself following until she was on it.

“To be honest, it never occurred to me that I would run for a cause that would resonate so much with me,” she said. When she signed up for the run, she was doing so to support her mom, who was planning to run a half-marathon. A busy 14-year-old and nationally ranked swimmer, simply adding the race to her schedule would take sacrifice and planning.

But after returning from the Interfaith Camp, she said she learned about the Young Leaders Build from Seeds of Peace India Programs Director Sagar Gangurde.

“After the camp I was still absorbed in the Seeds of Peace energies, so when I got the message about the YouthBuild, I found a cause I deeply resonate with,” Tanisha said.

“No matter where I go, I always long for the comfort of my home, because that’s where I feel a true sense of belonging. It bothered me that so many are not able to experience that feeling of belonging and safety under a roof. I wanted to change that, and that’s what motivated me to run.”

The Interfaith Camp took place in December, and with the race happening in January, she had little time to waste. She set a goal of raising 50,000 rupees (about $681), but when Sagar encouraged her to set a bigger goal, her competitive nature took over: She doubled her goal—and then surpassed it, raising 165,000 rupees and learning a lot about fundraising along the way.

“I realized that complete communication is key, and this has taken me a long way,” she said, adding that the joy of participating in a fundraiser was “addictive.” She has since helped raise over 300,000 rupees for other charities, with hopes of continuing to find ways to support and empower those who need it most.

“The youth in India have so much potential to lead change and to make a difference,” she said. “Through Seeds of Peace, I learned that we have a voice that matters, and that it has power to make change.”

Learn about our South Asia Programs ››

Amid uncertainties, Seeds of Peace Educators rise to the challenges of the moment