Over the last four years, the night crowd of Tel Aviv has become familiar with a colorful logo comprised of a queen, the type you would find in a deck of cards, holding up her palm, signaling you to keep your distance.

The logo belongs to Layla Tov (Hebrew for “good night”), a nonprofit organization I founded in 2015 with eight other relentless women to create safe spaces in the nightlife. Our goal was to set a standard for Israel’s nightlife to become what it claims to be—fun. For everyone.

For too long, the bar and club scene has been considered an outlier from the spheres needing to be ‘cleaned up’ from sexual harassment. Where the feminist movement was able to change the norm, albeit sometimes declaratory, of personal safety from sexual harassment and assault—the nightlife somehow remained a scene with no boundaries.

The darkness, loud music, sexual atmosphere, alcohol, and drugs caused most people to assume that assault and harassment are an inherent price we must pay. As if dancing and enjoying drinks were somehow a privilege for men only, where us women were part of the set, objects to have fun with; definitely not the owners of our own experiences, and never entitled to draw a line. 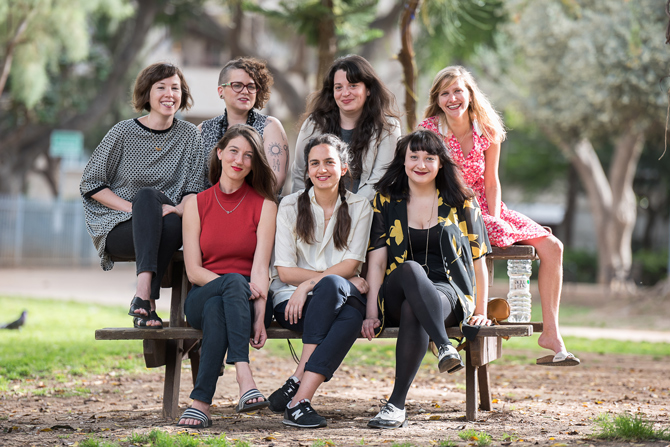 Keren with the other founders of Layla Tov (TimeOut Tel Aviv)

Understanding these underlying assumptions was key. We wanted to “take back the night.” Where that used to mean being able to walk the streets or cross a campus without fear, for us it meant much more—we have the right to enjoy ourselves, to dance and feel free, without anyone assuming our presence is for their entertainment.

We launched a series of public discussions between nightlife patrons and bar and club owners, where each side was surprised: The owners, at how widespread the problem is; the women speaking out, at how much bar owners cared. Together, we came up with an innovative solution: a voluntary code. Each venue that chooses to join adopts, as a baseline, a policy of zero tolerance towards sexual harassment and violence.

The code binds them with the following principles: 1) The staff, managers, and owners must undergo annual training on how to recognize, prevent, and address sexual harassment. 2) Branded signs conveying the message of zero tolerance must be hung in visible places within the venue. 3) The venue assigns a staff member to coordinate all efforts relating to combating sexual harassment. 4) The staff has to always address complaints immediately, respectfully, and sensitively, in accordance with the training.

In our training sessions, we focus a lot on the value of mutual responsibility—that staff should keep an eye out for what goes on beyond the bar and notice if anyone is acting oddly. They should know that it’s not only allowed to intervene or kick out people who misbehave, but that we expect it from them, and are entitled to our safety.

The response to Layla Tov has been overwhelmingly positive. We have had 70 bars, clubs, party productions and festivals all over the country join us, only by word of mouth. Customers began demanding that their favorite venue talk to us; it has become almost like a basic condition a bar has to offer, such as fire safety and kitchen hygiene. We’ve collaborated with local councils and government ministries, and have received huge media coverage. It has really changed the way people think of safety and boundaries, even before #MeToo.

As a Seed, I feel like identifying a problem and immediately thinking of how I can help solve it has become part of my nature. But more than a general inclination towards entrepreneurship, it is also about ‘how’.

When we do our trainings with bar staff, we are often asked if we expect nightclubs to stop potential harassers at the door. It sounds at first like a positive attempt to avoid the problem before it even starts. But spending time understanding other people’s narratives, like Seeds of Peace has facilitated for me since I was 15, made it clear that this type of question entails a problematic subtext.

Bouncers can use Layla Tov as a pretext for not admitting minorities into the club. In our training sessions, we make an active effort to burst the myth that certain groups have a tendency to harass, and thus should be kept out. All people are liable to harass and harm others, with no relationship to the color of their skin or where they live, and we refuse to lend a hand to using sexual harassment to adopt racist practices.

Fundamentally, a lot of the members in the Seeds of Peace community have a flame burning within us. It pushes us to be in constant movement and action, but it also connects us, our stories and perspectives, to move in solidarity and sensitivity to what hurts, and to use those pains to create better, more just, more inclusive societies.