The performance began with Mira Awad—a musician, GATHER Fellow, and self-proclaimed ‘artivist’—blowing into a conch shell.

It might have been a strange choice of instrumentation for someone who is a half-Palestinian, half-Bulgarian Israeli citizen. But the melody emanating from this object native to the Caribbean set an intimate and reverent tone in the dinner theater in the heart of the Village in New York City.

“Sometimes I feel like an old, old tree with deep roots,” Mira said to the audience at Joe’s Pub on the evening of February 28th. Speaking of her national identity, she said, “I confuse people, because we’re confused,” and explained that she and her father were both born in the same small village, but her father, born 39 years earlier than she, is from Palestine, whereas she was born in Israel. 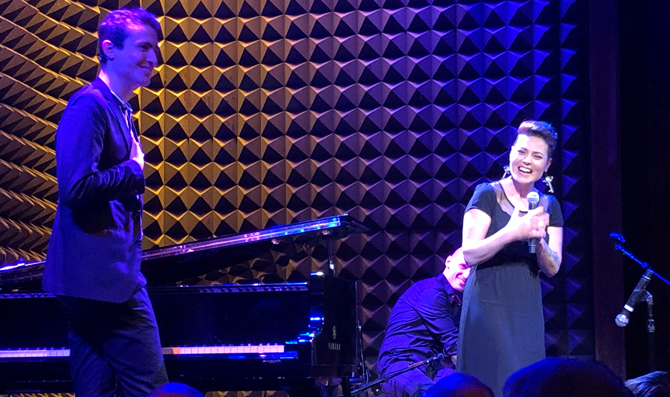 Her songs speak to themes of unity, hope for the future, exile, and the feeling of walking on a tightrope without a net. For most of the show, she sang accompanied by pianist, Guy Mintus. For a few songs, she called guest performers up to the stage: a percussionist named Michael Feigenbaum, an Israeli Jew who had run the New York City Marathon hand-in-hand with someone from Gaza; Tim Ries a renowned saxophonist; and his daughter, Jasia Ries who sang in French with Mira.

By turns soulful and exuberant, Mira had the audience spellbound—especially when she sang U2’s “One” in Arabic and Hebrew, as well as its original English.

“Everything I do on stage and off is to bring change, bring people together, bridge together communities, eliminate fear and suspicion,” she said.

She ended her set with a song called “Bukra,” (which means ‘tomorrow’ in Arabic.) “I’m a big believer in tomorrow. If we wake up tomorrow and do things differently, we can change things.”