Jocelyn has returned to Pleasant Lake this summer as a nurse on the Camp medical team, a critical job during a pandemic.

“The reason I accepted this position is that it felt like my way to give back to an organization that has done a lot for me,” she says.

Jocelyn, who grew up in a 350-person town, is the daughter of a white special-ed teacher from Maine and a black Navy officer from Arkansas stationed in Maine who got married to each other shortly after Loving vs. Virginia.

“Antiracist work is of personal importance as a bi-racial person with white ancestry,” she says. “I feel it’s important for me to use that privilege to work towards dismantling the white supremacy that gives me privilege in the first place.”

“Everyone in my town knew me and knew that I was bi-racial, even though I am perceived as white. People would tell me that because I didn’t look black, I didn’t get to have an opinion about racism. I’d still speak up, of course, because everyone should—as human beings.”

Jocelyn’s father met Tim Wilson, the Director of the Maine Seeds Program, when he was the commencement speaker at her school. Tim recruited her to become a Seed and became a mentor to her after her father died.

“Seeds of Peace gave me the opportunity to explore my identity and views and provided me the tools like active listening to move forward and incorporate what I learned into my life and career,” she says.

“It definitely set me on the path as far as what kind of socio-economic or political issues I wanted to make an impact around and instilled me with leadership qualities—there were things in college that I would not have been involved in if it had not been for Seeds of Peace.” 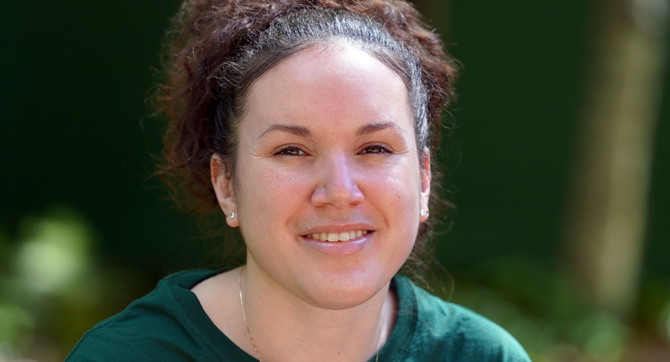 She graduated from Colby College and earned her nursing degree from the University of Maine at Fort Kent just as the pandemic was starting.

“And now I’m back at Camp as a nurse. But I also know what the campers are going through here, because I was a camper. So I bring that perspective as well.”