Aya joins the Seeds of Peace Camp Staff from Syria via Dartmouth College.

For nearly a decade, The John Sloan Dickey Center for International Understanding has provided two Dartmouth students an unparalleled opportunity each summer to learn about peacebuilding and conflict resolution first-hand by becoming Seeds of Peace Camp counselors.

Aya is now responsible for a cabin of campers from across Maine who engage in dialogue sessions across lines of difference, a departure from what Aya grew up with.

“Talking about politics in Syria is dangerous,” she says. “It’s forbidden. Anyone can shoot you—assassinate you—if you say the wrong thing.”

Aya grew up in the coastal port city of Latakia on the Mediterranean, learning to swim in the sea. She gained admission to the only boarding school in Syria, established by the government to graduate changemakers, with a goal of attending college and then developing her country.

The obstacles were immense.

To qualify for admission at Dartmouth, Aya had to travel overland to Lebanon to take the TOEFL English-language exam. She passed.

“They teach you English in school, but you don’t get to anything near fluency that way. Music helped me—primarily Taylor Swift. So did movies and TV shows: The Office, How I Met Your Mother, The Big Bang Theory.” 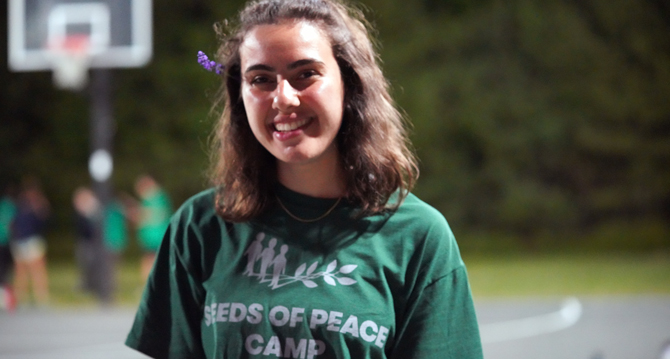 Meanwhile, her city was being attacked by both Syrian rebels, including the Al-Nusra Front, and the Israeli Air Force.

“It was frightening. There was constant bombing. We’d just stand by the windows and watch. Al-Qaeda was one street over. At one point, we thought about fleeing. My dad wanted to leave. I remember overhearing my parents talking on the balcony after they thought we were asleep: my dad wanted to flee to Germany. My mother refused.”

“I’m glad we stayed, knowing what has happened to Syrian refugees.”

As a counselor to a bunk full of girls, including some from families of immigrants, refugees, and asylum seekers, Aya has heard stories that she was not expecting.

“I was surprised by these teens and the issues they deal with. When I see that these highschoolers have been through all these things, I’m amazed.”

She says was drawn to Seeds of Peace given its reputation for peacebuilding and conflict resolution internationally, but also for its work in the US with populations she does not typically interact with back in Hanover, New Hampshire.

She plans to major in Computer Science and Middle Eastern Studies, and then work with refugees in areas of conflict.

“That could be me; I could be there,” she says. “That’s why I feel so connected to refugees.”

How far will one Seed go to educate Afghan’s youth? As far as it takes