Follow the Fellows: She fought to be heard. Now she’s giving voice to others.

“I am sure there are people who might not consider me a ‘good girl,’” Mehwish, a 2019 GATHER Fellow, said recently in a phone interview.

In her country of Pakistan, she explained—as well as in many parts of the world—being a “good girl” in others’ eyes can mean kowtowing to demands, not making waves, and “saying yes to nonsense.”

That is not Mehwish.

“I don’t care what people think about me,” she said. “I cannot stand injustice and I cannot abide nonsense—regardless of whether it’s happening to me or my enemy.”

In a society where young women often have limited choices, Mehwish has been fighting to pave her own way since she was a teenager. Today, she’s become a source of knowledge and strength for others, and is dedicated to working with vulnerable communities, especially youth: educating them on their rights, empowering them to make good choices, and engaging them in the civil process so that they might be voices of change.

“Every young person should have a basic knowledge of life skills and legal rights, as well as courage and zest to speak about their community and achieve peace within their surroundings,” she said.

A LIGHT FOR OTHERS

Mehwish learned to be an independent thinker from her mother, a fortress of strength who raised Mehwish and her brother mostly alone. She taught Mehwish from an early age that girls, even young ones, had the same rights as boys, as well as the ability to question men, elders, and authority figures.

They were skills that would all too soon be put to the test. When Mehwish was 19, her mother died of cancer, and soon a battle began for Mehwish to fight off pressure from her extended family to marry young and to sign over her mother’s pension.

“It was a real hell for me, being a single 19-year-old woman,” she said. “And probably 90 percent of young women in my situation would have given up, just gone with the flow, and gotten married, but I said no, and I fought for my rights.”

Her mission now is to be the light to others that she wishes she would have had during those trying times. Through the Laureate Foundation, a non-governmental organization that Mehwish founded in 2008, she holds workshops, discussions, community dialogues, and trainings that aim to educate, empower, and encourage participants to become more actively involved in local elections and government.

In these programs, especially the dialogues, participants are able to learn to think critically, and to address problems that are core to the issues in their communities, like interfaith harmony, forced child marriages, and young people’s rights and roles in their societies. And while the people she works with vary greatly in age, education level, religious background, and socio-economic status, a large part of Mehwish’s attention is focused toward women and teenagers. 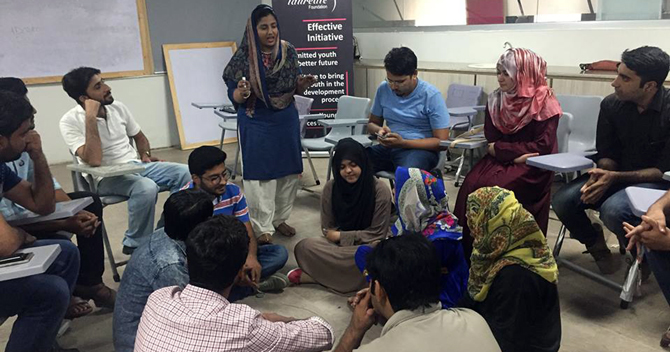 Researchers believe the rate of suicides and deliberate self harm among young people in Pakistan could be among the highest in the world, but it’s hard to know for sure: Organizations that track such things say it’s an under-studied, under-discussed topic in the country, possibly in part because of the criminalization of suicidal behavior in Pakistan.

“There is so much pressure on youth to succeed, yet they are given few chances to make decisions, to be heard, or to pursue avenues to contribute to society other than the ones their families expect of them,” she said. “The challenges I went through as a young girl have shown me it is imperative to enhance youth’s skills so they are capable of making the right choices, and participating in their communities in a way that ensures a peaceful society.”

There tends to be an underlying urgency in Mehwish’s voice. She speaks directly and concisely, and in most pictures, she looks out from under a brightly colored hijab with a discerning, determined gaze that suggests she’s seen a lot for a young woman who only recently turned 30. 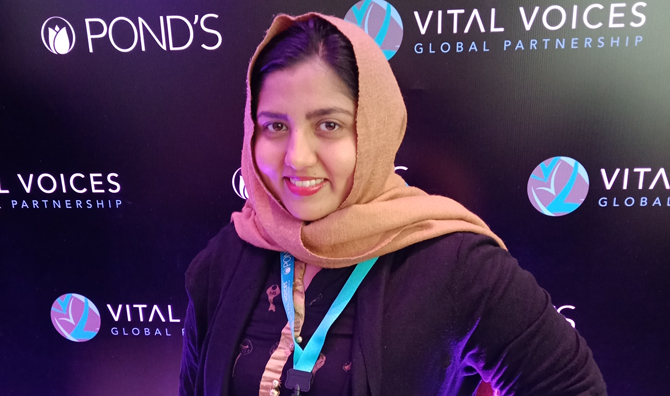 More than 2,500 people have passed through her programs already, including dozens of minority youths who have gone on to receive prestigious international scholarships, members of the transgender community who are leading movements for civil rights, and women who have taken control of their futures by starting businesses and continuing informal education. Now, she is using her time with GATHER to focus on the next goal: creating a more empathetic society. She hopes that in the long run, this will mean more opportunities for youth to participate in dialogues and lead change in their communities, and less room for intolerance, despair, and extremism.

Despite the success of her work so far, it hasn’t been easy making change in a society where many see her work as a challenge to the patriarchal order. She isn’t one to dwell on her hardships, however, and though she rarely shows cracks in her armor, she learned through her experiences with Seeds of Peace— first as a Delegation Leader in 2015, and now as a Fellow—the importance of allowing yourself to be vulnerable and to talk about your challenges. 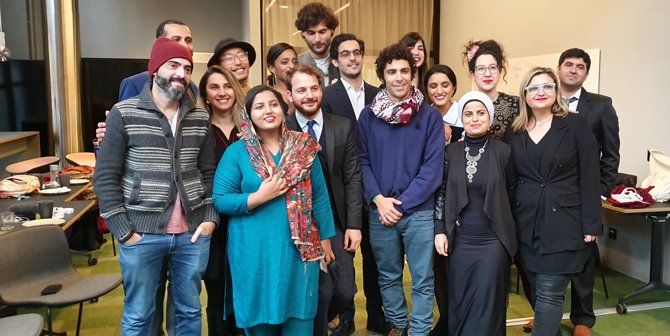 Doing so with her GATHER cohort, she said, has helped her move past some hurdles that have been holding her back, like not approaching certain people within the local government offices for fear of being harassed.

“After leaving the GATHER convening in April, I came back and talked to the people I had been avoiding in the past,” she said. “I entered the government offices with the mindset that it would go great, and it actually ended up very good. I found good people there.”

She isn’t one to dwell on her hardships, but believes they can be opportunities to learn, grow, and take action.

“The world around us can be harsh, but the reason I survived is because I developed the power to identify and analyze a situation, and then get out of it sooner rather than later,” she said. “And this is something I want to work on with my youth. You didn’t meet your parents expectations? That doesn’t mean you have to end your life—let’s explore more avenues you can go down. It is important to be able to travel through a difficult path if you want to create your own.”

This series highlights our 2019 GATHER Fellows. To learn more about the inspiring social change that Mehwish and our other Fellows are working towards, check out #FollowtheFellows on Facebook, Twitter, and Instagram.

Seed Stories: Lessons from the first Seeds of Peace Camp