Follow the Fellows: Slowly, slowly, the awakening of a changemaker

“I don’t have this American story of one thing that changed me,” Liel, a 2019 GATHER Fellow, said slowly, carefully, in a recent Skype interview from his home in Jaffa. “There were many steps along the way.”

Born to an Italian mother and Libyan father who was expelled with the local Jewish Community from Tripoli in late 1960s, Liel grew up in a very rightwing family.

“They saw the peace process as a danger to the state, or even to the Jewish people,” he said. “They organized demonstrations, they sent us to a nationalist/religious school, and for us, the Jewish values of the state, the connection to the biblical land, and especially not having trust in our enemies, was very central.” 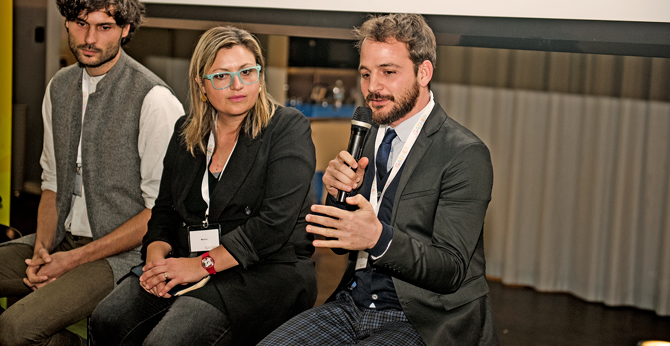 So it might seem counterintuitive that today he is the co-director of the Israel Palestine Center for Regional Initiatives, works to form partnerships across lines of conflict and to build new frameworks of solidarity necessary for change in policies.

The first step in this transition to change was his mandatory service in the Israeli army.

“Like many of us who were educated about the importance of serving, I was excited in the first week,” he said. “I called my friends that were enrolled a year before me and I was happy to tell them the news that we were going to serve in the same unit, and he told me, ‘Liel, it is not funny, and it is not an exciting thing. Do whatever you can to leave the place as soon as possible.’ And from that first week, I began to have questions within the trainings, and I really didn’t like the answers that were given.”

As time went on, answers never came, and his friends’ warnings turned out to be even worse than he imagined—he saw time after time how people lost their humanity when dealing with civilians, and even with their fellow soldiers. He saw how those who didn’t want to be there suffered, some harming themselves: one friend even committed suicide.

It was an extremely painful process for Liel, and opened his eyes to truths that he might not have been ready to experience otherwise.

“After the Army, a friend of mine invited me to help her with an educational program that was a mixed group of Jews and Arabs, and it was the first time I saw the option of having positive interactions with the other side,” he said.

He began to become involved in more organizations that worked to shape policy—including within the Knesset, the United States Congress, and the European Union—as well as with peacebuilding organizations like the Arava Institute, Seeds of Peace, Givat Haviva, Mejdi Tours, and Combatants for Peace.

“In the beginning I was addicted to these spaces where I had the option of having positive relationships with the other side. I found something was healing in me regarding all the pain that I had, and I wanted to be there all the time,” he said. “Slowly, slowly, I became very passionate, and I voiced my opinions a lot, engaged in a lot of arguments with people around me and also with my family.”

But then, an unexpected thing began to happen: Through his Palestinian friends he began to learn the history of the region and to speak Arabic, the language of his father’s homeland.

And with time, especially with his growing understanding of the Arabic language and the history of the Middle East, a new connection with his father emerged.

“We started speaking about the history of the region, the problematic presence of foreigners, the importance of recognizing the expulsion of various groups, including Jews, from Arab countries, and I was telling him all the time that I bring into dynamics the connection of my family to Libya and the fact that they cannot go there anymore. And from this his heart opened, because he felt like he was being heard and his story was being heard.”

In order to change the framework in which the peace process is discussed, Liel promotes a regional approach throughout his projects while trying to highlight lessons from other regions.

At the time of this interview, Liel was in the thick of organizing “In Between: Visions From Contested Cities,” an IPCRI conference that will bring together representatives from cities that were divided by conflict—Belfast in Northern Ireland, Nicosia in Cyprus, and Sarajevo in Bosnia—to share perspectives and expose Jerusalemites to how conflicts were handled in other places.

“It seems that we have been talking about the conflict in the same way for many years now, we’re stuck in the same language, the same solutions,” he said. “It’s important to show the people that it’s possible to solve conflict—we’re not stuck with it, but we should think creatively about how we solve it.”

In other projects that he leads, he tries to build forums of people from across the region aimed at promoting a regional agenda towards social change. And when he’s not working on a project directly related to the Middle East conflict, he’s spending time with people who work in the field, and even his “getaways” are typically more like work retreats, for example, working in the desert as opposed to the city.

“I really like the phrase ‘if you do something you love, you won’t work one day in your life.’ I really don’t feel it is work. I’m passionate and dedicated to what I think is right, and I don’t need to count hours or find time for vacation days,” he said.

That’s not to say that the work isn’t incredibly challenging. He draws strength and resilience from his friendships and the communities he’s become a part of, including the GATHER Fellows.

“I was really inspired by the idea of bringing together a community of changemakers from around the world to learn from each other, to connect, to rejuvenate our energies,” he said. “Even across communities we can strengthen each other to not fall into the national divisions that made the problems in the first place.”

His focus in GATHER is to create a space for discussion between groups working on evolving the conflict, allowing activists to learn more and engage more fully, and organizations to bolster effective programs. And while he sees signs of progress in connections between individuals and various groups, he said the most difficult part “is understanding how far we are from where we want to be.”

“When you create these groups and feel connections from both sides, it’s really painful that you cannot see your friends on a regular basis. You actually cannot meet legally,” he said. “You see with your eyes the marginalization and the discrimination that is happening on a regular basis. You’re hearing about demolition orders and inciting racism. It shows you again and again, day after day, how far we are from what we wish we would be able to achieve.”

And personally, he is locked in an ongoing sort of internal tug-of-war with his place in it all. Growing up, he didn’t want to be involved in the conflict, but now that he knows what he knows, and has the friendships that he does, he feels he has no other option.

“The greatest endangerment for me is to become numb to the situation,” he said. “When you know the other side and connect to it, it’s very hard to ignore the atrocities and the conditions of life that people have under occupation. And as a person who is more privileged in this specific context, it is very important to use the privilege in order to support the fight for equality. I think this is what true activism is and what true friendship is.”

This series highlights our 2019 GATHER Fellows. To learn more about the inspiring social change that Liel and our other Fellows are working towards, check out #FollowtheFellows on Facebook, Twitter, and Instagram.

Heck, yeah: 2019 Fellows celebrate an end, and many beginnings