Follow the Fellows: Looking out for Europe’s unseen refugees

As a very small child, no older than 6, Divya says she remembered seeing children begging in the street while visiting family in India. Having only lived in a Midwestern U.S. suburb at the time, her young mind couldn’t make sense of it: “Why are the children so dirty? Where are their parents? Why are they not in school? Why isn’t everyone freaking out?”

“I was told to stay away from them,” she recalled during a phone call from her current home in Baltimore last month. “But I was like, why is it OK that I have what I have, and they have nothing? And why is no one bothered by it?”

From an early age, Divya, a 2019 GATHER Fellow, has been drawn to the people, places, and systems that are, by and large, often overlooked, and she’s long had a knack for seeing when things didn’t quite add up.

She’s so good at unearthing logical flaws, in fact, that among her 2019 GATHER cohort her name became synonymous with searching for the truth. (For example, when the group visited Swedish parliament, she “Divya’d” several policymakers into reluctantly admitting that Sweden sells weapons to Saudi Arabia.)

“Yeah, I guess I ask a lot of questions when things don’t seem to make sense,” she said with a laugh. “When I feel like there are gaps in what people are saying or there seems to be a logical break, I want to know where that’s coming from. I like to fill in that gap.”

Today she’s channeling her inquisitiveness—and her compassion—toward helping some of the most vulnerable populations in countries around the world.

In the midst of pursuing a MD/PhD at John Hopkins School of Public Health and Dartmouth’s Geisel School of Medicine, she’s working as a GATHER Fellow to change the narrative around the practitioners and recipients of humanitarian aid—particularly in regards to male unaccompanied refugee minors.

She’s had an opportunity to see firsthand the struggles this group faces, beginning in the summer of 2016 when she volunteered as a translator with an organization aiding refugees in Greece. In multiple visits over the last three years, she’s noticed a level of friction between refugee youths and NGOs that has led to a system of fragmented services. The conflicts over how to help minors has left them with few skills to become independent adults, and even less hope. 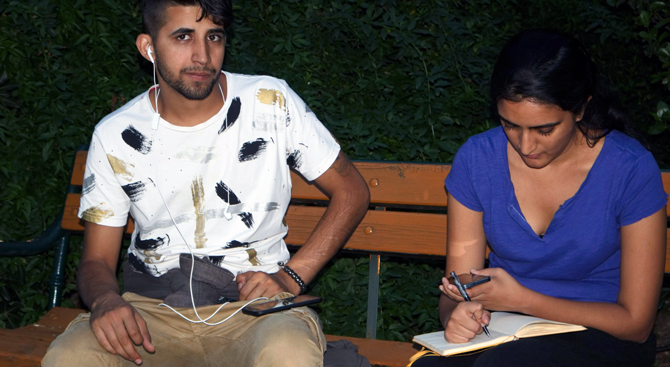 “There’s a pretty big disconnect between what an organization is willing to give and thinks is a priority, versus what these young boys actually need and want for a healthy development,” she said. “And if we’re not solving it, they’re going to do it in their own way, which may actually be damaging.”

Boys account for over 90 percent of unaccompanied refugee minors, Divya said, many of whom left home before they had the chance to learn skills that would help them flourish at home or in their host countries. Humanitarian aid is often quick to respond to the needs of women and children, but as these unaccompanied boys begin to transition to adulthood, they go from being considered part of the most vulnerable groups (children), to the least vulnerable (single young men). They fall into a sort of limbo, where they may look like young men, but their internal development more closely resembles that of young boys. 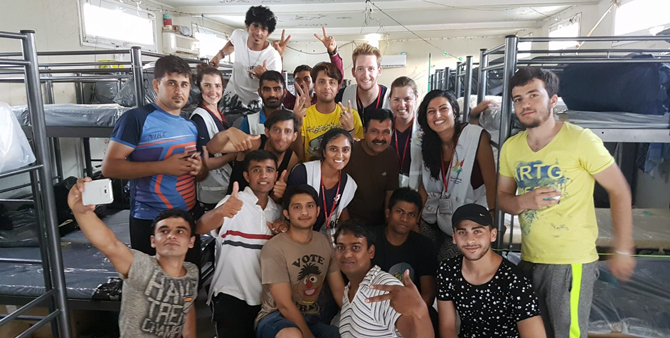 In 2016 Divya was one of the first interpreters allowed to enter the minor section of the refugee camp, and because there were so few interpreters who spoke Urdu, she left her phone number with a few of the boys to be a resource.

“Some of the boys, when they lost their accommodations or turned 18 and aged out of receiving services, ended up in very exploitative circumstances, like working labor on a farm where they weren’t allowed to go to the doctor if they got hurt,” she said.

One of those boys did get hurt, and remembering that Divya had some medical training, he called her for advice.

“I was kind of shocked,” she recalled. “The rhetoric around child protection is to protect and take care of these kids who would otherwise be hurt or maybe exploited, and you’re not accomplishing that goal if you’re just letting them out to be exploited the second they turn 18. It was an issue that no one was really addressing at that time, so I decided to do my PhD on it.”

Divya has since returned to the region multiple times for volunteer and thesis-related fieldwork, and what she’s found, as she reported for the Hopkins Bloomberg Public Health Magazine, was that the current systems leave youth ill equipped to deal with the emotional and psychological trauma associated with leaving home and surviving in a new country. Further, they do little to give them the tools, guidance, and support to help them imagine and find ways they might participate in mainstream economies.

She recalled one Afghan minor, for example, who told her that he watches the Greek kids go to school and play football, while he sits in the refugee camp just eating his three meals, day after day, with nothing more to do, nothing to work towards.

“Without parents and teachers and other supportive adults, they often miss out on the ability to build skills that they would need to be independent adults,” Divya said. “As a result, they have no direction, no scaffolding to hold onto as they enter adulthood.”

The solution, she said, wouldn’t involve anything groundbreaking, but it would require NGOs and social service organizations to see and understand unaccompanied minors holistically—the way we understand adolescents in our own communities—rather than through the lens of international treaties and policies.

“They are adolescents, and we know how to raise adolescents,” she said. “But instead, there is a subconscious ‘othering’ of migrants, and we try to create a completely separate model of what we need to do for them. In trying to reinvent this wheel, we miss some critical pieces.”

This fall, Divya will resume medical school (in her program, a doctoral degree is usually obtained between the pre-clinical and clinical years of medical school) in the relatively rural state of New Hampshire. In much of her work, she said she feels as though she is working in silos. Being a part of GATHER, however, has given her the opportunity to “connect with an incredible group of people that sort of helped me think about how I could pull all of the pieces together.”

And she believes it’s through coming together, treating others as we would members of our own family, that refugee youth can have a better chance to thrive, to become contributing members of whatever society eventually becomes their home.

Of all of the things Divya’s done in her brief 28 years, it’s the changing of minds that makes her most proud. She’s seen the way Islamaphobic relatives, acquaintances, and colleagues have changed their thinking towards Muslims after seeing her work in Muslim communities, as well as the way people in conservative communities where she works have changed their opinions toward women.

“When you undo the prejudice, that to me is a huge victory,” she said. “The truth is, every person in the world is more like you than not like you.”

This series highlights our 2019 GATHER Fellows. To learn more about the inspiring social change that Divya and our other Fellows are working towards, check out #FollowtheFellows on Facebook, Twitter, and Instagram.