Follow the Fellows: A new approach to the War on Drugs

In 1971, more than a decade before Theo was born, Richard Nixon declared the “War on Drugs.”

If that “war,” or any of the other anti-drug platforms that the United States—and to an extent, Theo’s home country of Canada—had been even mildly successful, Theo and his friends would probably be doing something very different with their lives right now.

Actually, a lot of people—particularly those from historically marginalized groups in the U.S. and communities directly affected by the drug trade in the Americas—would probably be doing something very different with their lives right now.

Theo is a 2019 GATHER Fellow and co-founder of Catalyst, a cross-border education initiative that he said was born out of “a group of friends thinking about the drug education we had received, and how inadequate it was to help us make sense of the things we were seeing around us.”

Growing up in rural Canada, what little drug education Theo received as a child came mostly through the Drug Abuse and Resistance Education (DARE) program. In that program (which has since been declared a failure) a uniformed police officer would come into classrooms and teach 11- and 12-year-olds to “just say no” to drugs. Little, if any, attention was paid to the bigger picture, and even less space was given to kids to process what they might actually be facing in their own homes or communities.

It wasn’t until he attended college in New York City that Theo got a chance to see the rest of the picture: While volunteering at a community garden in Harlem, he began to hear first-hand accounts of the effects of the crack epidemic in the 1980s, police brutality, and young boys being sent to jail for minimal possession. His roommate at the time, Benji, a co-founder of Catalyst, also told him about the drastic spike in violence and militarization that he saw while growing up in Guatemala as a result of the drug war.

“That planted the seed of thinking that there is something here that I need to better understand,” Theo said earlier this month from Mexico City, where he now lives. After undergrad, he went on to pursue a Masters degree at Cambridge University in England, where he dedicated his thesis to the war on drugs.

“The more I started to learn about the history, the more I was really shocked and appalled that it had taken me until my Masters degree to come into contact with this body of knowledge, and I wondered why it had not been made available earlier,” Theo said.

He started thinking about his own drug education, how addiction runs in his father’s family, and, at least in the case of several of his uncles, substance abuse had always been explained to Theo as a personal moral failure of the user rather than a biological or systematic one.

“Around that time, it also came to light that one of my cousins was pretty heavily embedded in the drug trade, and I started thinking a lot about how those experiences weren’t necessarily disconnected from Benji’s experiences in Guatemala. Those drugs come from somewhere, and they follow routes that cross borders, and tie together different countries within the continent,” Theo said. “The more I thought about it, the more it seemed urgent to create a space to think through the full complexity of drugs and drug policy, specifically in the Americas.”

Along with Benji, as well as friends from Philadelphia and Mexico, Theo launched Catalyst in 2017 with the goal of creating opportunities for cross-border dialogue among youth and educators from communities directly affected by the problem. (The problem so far has been the drug war, but there are plans to add a new program around land defense in the Amazon River basin, as well.) 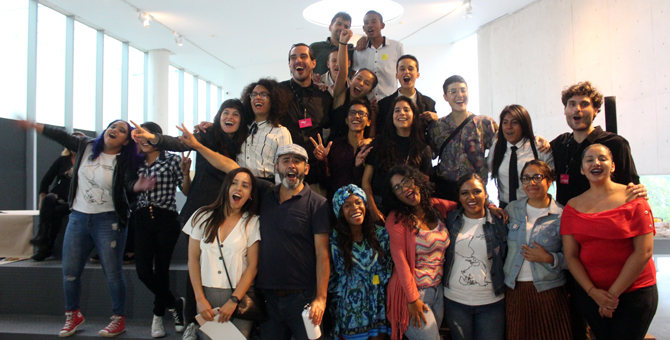 The program is a year-long fellowship for educators and students ages 15 to 18 from North, Central, and South America. Whereas statistics show that this age group is among those most deeply affected by the drug trade, Theo said there is often very little room for their voices in policy debates around the issues. Catalyst seeks to give them that space through their fellowship, which includes a three-week intensive incubator where participants study the problem from a transnational perspective, share personal stories of how the drug war affects them at home, and receive tools and skills to launch projects of their own back in their communities.

Not only are they able to explore the past, present, and future of drug policy debates, but they’re able to learn first hand how interconnected their lives are, despite the borders that might lie between them.

“I think that there’s a lot of power in having students live together and learn together from the different communities,” Theo said. “It is one thing to read about something in an article in the U.S., but when your friend who you have just made over the past few weeks is telling you about how these policies played out for them and their family in their village in Mexico or Colombia — it makes it personal and urgent in ways that reading something in an article or a textbook might not otherwise.”

If there are elements of the program that are starting to ring bells, it’s more than a coincidence. Theo applied for the GATHER Fellowship in part to find community support as Catalyst grows, but as he learned more about Seeds of Peace, he also began to see a kindred spirit in bringing together youth to share their experiences and empowering them to make change.

Some of the challenges Catalyst faces are also similar to those that Seeds of Peace has faced through the years, like convincing parents from places where camps aren’t common that the program was not some sort of scam; obtaining visas for the students to cross borders; raising funding; and, of course, safety for program participants once they return home.

Yet despite those challenges, like many of those with Seeds of Peace who work in areas of conflict, he feels a need to keep pushing, to keep working.

“It feels very urgent—living in Mexico and seeing the suffering that policies in other countries cause here. The levels of violence that this country is experiencing never cease to shock and terrify me,” Theo said. “And knowing that the roots of that violence extend far beyond Mexico, I can only think about this problem as everyone’s responsibility.”

This series highlights our 2019 GATHER Fellows. To learn more about the inspiring social change that Theo and our other Fellows are working towards, check out #FollowtheFellows on Facebook, Twitter, and Instagram.

11 tips for untangling life after Camp