“Through all the places I’ve been, all the experiences I’ve had, and all the people I’ve met in my lifetime, nothing provides me with hope for humanity like God and the young people I’ve met through Seeds of Peace.” — Wil Smith

To Members of the College Community,

The Bowdoin community and so many others lost a truly wonderful person early Sunday morning when Wil Smith of the Class of 2000 finally succumbed to the cancer he had battled so long and so bravely. He was 46 years old.

Wil passed away at a hospital in Philadelphia surrounded by the love he had done so much to generate during his short but so very accomplished life. Over the past several days, many of those he befriended, inspired, and mentored during his years as a student, an athlete, and a leader at Bowdoin came to be with him in these final hours. We told him how much he meant to us and how much we loved him, and Wil responded in typical fashion with the smile we all know so well.

Wil’s was truly a life well lived. Born in Florida, Wil was the last of ten children. His mother, Mildred, died of cancer on Wil’s fifteenth birthday. After high school he attended Florida A&M University for a year. He enlisted in the U.S. Navy in May 1989, and was trained to be an aviation electronics technician. He served in the first Gulf War and, while stationed in Italy, he was transferred to the Brunswick Naval Air Station. In the summer of 1995, he met Bowdoin Men’s Basketball Coach Tim Gilbride, who encouraged Wil to apply to Bowdoin, and the rest is a story well known by all associated with the College in those years.

But what few knew in those early days was that Wil was also a single parent. He struggled to balance his schoolwork while caring for his infant daughter, Olivia, until staff discovered his circumstances and a Bowdoin support network was established to help them both. As an older student – he was 28 when he matriculated – Wil was always a leader at Bowdoin, in the classroom, in our local community, and on the basketball court, with young Olivia playing in the stands during practice and corralled by coaches, students, and staff during games. Wil graduated with a degree in sociology, receiving his diploma in one hand while holding Olivia in the other. This inspiring story of Wil and Olivia at Bowdoin was chronicled by Yankee magazine editor Mel Allen in “A Letter to Olivia,” published in the winter 2000 edition of Bowdoin magazine. Appearances on the Today Show and on Oprah followed. 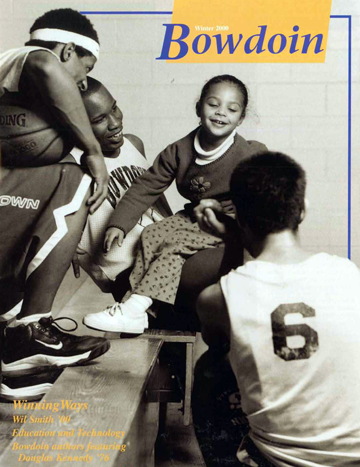 After graduation, while Wil continued to serve in the U.S. Navy Reserve, he joined the staff at Bowdoin as director of multicultural student programs. He went on to study law, earned his degree at the University of Maine School of Law, and in 2006, returned to Bowdoin where, as associate dean of multicultural student programs, he was instrumental in helping the College expand access and opportunities for students of color. Through his example, Wil also motivated and mentored students who were struggling. As far as Wil was concerned, there was nothing students couldn’t accomplish, and he let them know that every day. Once again, the media noticed Wil’s work and he was the focus of a “Making a Difference” report on NBC.

Wil was not one to sit back and take it easy. Beginning in the summer of 1999, before he graduated from Bowdoin, Wil began working with Seeds of Peace International Camp, a conflict resolution program for teenagers from Israel, Palestine, Egypt, Jordan, India, Pakistan, Afghanistan, the United States, and immigrants from Asia, Africa, and Latin America. He became associate camp director in 2007, and was working at the camp right through last summer. And for nearly a decade, Wil coached basketball at Catherine McAuley High School in Portland, where he led the Lions to the state final in 2007 and amassed an overall record of 54-27. Today, at Bowdoin, we continue to acknowledge Wil’s other record—his record of service—with the annual Wil Smith Community Service Award recognizing outstanding service to the community by a student athlete.

At the time of his death, Wil was dean of community and multicultural affairs at the Berkshire School in Sheffield, Mass., where he also served as girl’s varsity basketball coach, director of new student orientation and student leadership training, and as chair of the school’s diversity subcommittee, among several other duties.

On June 15, 2012, just after Wil was diagnosed with colon cancer, the story of Wil and Olivia was told once again to the nation in a moving Story Corps piece aired on National Public Radio. It was a conversation that told much about Wil’s courage and the love between this father and his now adult daughter. And it inspired executives at Sony Pictures to reach out to Wil about telling his story in film—a project now in the planning stages that brought Wil and Olivia back to Bowdoin just last summer.

Memorial arrangements for Wil are pending, and the College will provide more information as it becomes available.

Many of us who knew and worked with Wil are deeply saddened today by this news of his untimely death, and our hearts go out to Olivia; to Wil’s partner, Maha Jaber, and her son, Nim; and to the rest of Wil’s family at this very difficult time. We will remember Wil with great fondness and affection, with respect for his many accomplishments, with awe for his optimism and determination, and with gratitude for all he did to make our community and the world beyond Bowdoin a better place.

Read the letter at the Bowdoin Daily Sun ››