For 130 new Seeds, Camp is just the beginning

OTISFIELD, MAINE | Over 130 youth from across the Northeast United States participated in the 2021 Seeds of Peace Camp, marking a much-anticipated return to the shores of Pleasant Lake in Maine after a two-year hiatus due to the pandemic.

And while it was a summer that was unprecedented in the nature of its obstacles, it also showed, now more than ever, the need to empower youth to work across lines of difference and lead change in their communities.

“We knew from early on that this summer would hold myriad challenges brought on by COVID-19,” said Sarah Stone, (a.k.a. Stoney) who served as Camp co-director alongside Spencer Traylor (2008 Maine Seed) and worked with a team of Camp leads hailing from across the Northeast.

“But youth and staff showed up ready to work across lines of difference with brilliance, compassion, and courage. There was so much beauty in their ability to share space and create a strong community rooted in care and in action, despite all the uncertainty and fear in the world right now.”
The summer kicked off in July with a two-and-a-half-week session for campers from across the Northeast U.S., followed by another session in August for only youth from Maine.

Closely monitoring ever-evolving CDC guidelines and following advice from public health consultants, a decision was made early in 2021 that only youth from within driving distance of Camp would be eligible this summer—meaning that for the first time in Seeds of Peace Camp history, there would be no international campers.
Instead, youth at Camp—and in all countries where Seeds of Peace works—began their Seeds journey by engaging in dialogue over issues within their own communities and countries, rather than focusing largely on cross-border conflicts.

For campers, it provided a much needed opportunity to discuss divides within the United States, with dialogue sessions tackling topics like religion, socioeconomic status, race, and political affiliation.

After a year full of political unrest, violence, and deepening societal divides, there was plenty for youth to dig into. But after a year that also wrought a heavy toll on mental health and greatly restricted opportunities for in-person social interaction, Camp staff also had to be mindful of when campers’ comfort zones might be overstretched.

“With so many schools hybrid or fully remote, youth’s social lives and interactions were mostly curated by themselves online and they hadn’t been re-accustomed to engaging with one another outside of this context,” Stoney said.

“At Camp, we did a lot of work to learn to see and hear one another not with the distance or wall of Facebook statuses or TikTok videos, but up close and personal, truly listening, unlearning, learning.” 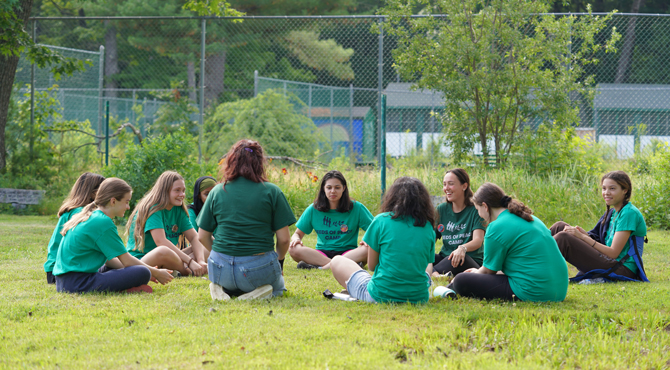 The expectation for dialogue, of course, has always been that Seeds would apply those experiences to take action for change in their schools and communities. This year, however, a series of workshops that prepared students to do just that were baked into Camp programming. Initiated and designed by Stoney, Community Action challenged campers to work together to identify and prepare to address issues they want to change back home.

As Danielle Whyte, a 2019 Maine Seed and Co-Leader of Community Action, described it: “Community Action is the art of amplifying the voice of the collective.”
Grouped with campers from their hometowns, youth created action plans to bring anti-racist curricula to their schools, hire more diverse faculty and staff, and build school decision-making structures that are more inclusive of student voices, to name a few. For Cayen, a Seed from Maine, it was an opportunity to return home with “concrete, realistic” plans for change.

“I feel that Community Action allows me to be reassured, organized, inspired and ecstatic that my fellow peers and I have a solid chance at bringing positive and undeniable change in myself and my community,” Cayen reflected in a Camper Report. “Community Action provides a plan, a way to enact the plan, confidence that the plan will work, and a purpose.”

The focus on youth-led action underscored many of the summer’s new additions and highlights—from camper reports in which youth shared their first-hand perspectives, to youth-led special activities, to daily inspirations provided by a different bunk at each morning lineup.

Writing in one of the reports, Faysal, a camper from Maine, said he had come to “expect the unexpected” at Camp.

Whether it was trying a new activity for the first time or having the opportunity to branch out of their groups and meet new friends at Café Night, campers explored their capabilities and how these strengths might add to the greater good of their communities.

“Seeds of Peace is an opportunity for you to find yourself in a place where you can be yourself,” Faysal wrote. “There needs to be change in the world, and here is where that starts.”