One was once a white supremacist. The other, a former Taliban recruiter. On Wednesday, they joined Seeds of Peace Director of Global Programs Kiran Thadhani at Brooklyn Law School for the Tanenbaum Center’s Courageous Conversations series.

The duo discussed their journeys to radicalization, their paths out, and how we can use dialogue to confront extremism in a divided society.

“A huge pull for white supremacy,” Arno Michaelis explained to the crowd, “is that it’s forbidden. That it’s frowned on by civil society. If things aren’t going well in your life, if you’re not comfortable with who you are and you have a poor self-image, one real easy way to bolster it … is to think you know things that everyone else doesn’t know and to feel like you’re pissing off the status quo.”

Arno became an active member of the white power movement starting at age 16, and eventually co-founded what became the largest racist skinhead organization in the world. But over time, the cognitive dissonance of his worldview became too great to ignore.

“I was telling this story that the world was supposed to revolve around, when real life was contradicting everything I was saying on a regular basis. And that hypocrisy was driven home by the kindness of others.” 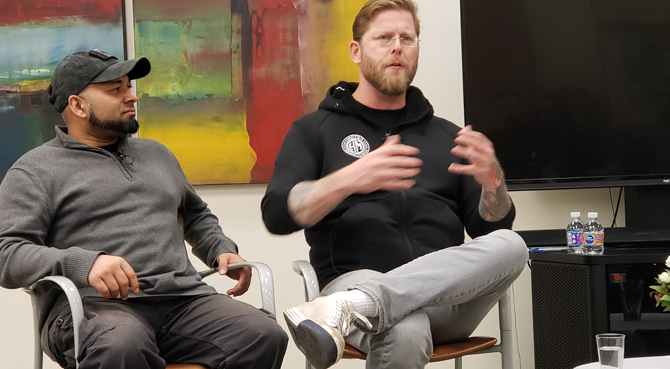 Arno recalled a moment where that came to a head. “I remember going to McDonald’s on my first payday, and behind the counter was this elderly black woman who has a smile on her face that is so authentic. Like everything that is good about being a human being was embodied in this woman’s smile … And it made me so uncomfortable, because I was trying so hard to hate her.”

When she saw the swastika tattoo on his finger, Arno said, it was the beginning of the end. “I’m 6’3”, but in that moment I felt six inches high. And when I finally looked back up at her, she just calmly told me, ‘I know that’s not who you really are. You’re better than that.’ I felt destroyed.”

While teenage Arno thought himself an outcast, Mubin Shaikh was popular at his high school. But after his uncle caught him hosting a raucous house party with his classmates, Mubin developed an identity crisis over his relationship to his religion that drove him to extremism.

“[The uncle] was like, ‘Oh my God, what have you done, you’ve defiled the home, people pray here,’” Mubin told the audience. “And immediately this shame and guilt took over me. I decided that in order to fix myself and salvage my reputation, I had to get really religious.”

He travelled to India and Pakistan, where a chance encounter with the Taliban led to him spending years as a recruiter for the organization. But after the September 11th attacks, he began to reconsider his views. In 2002, he sold his possessions and moved to Syria to study Islam.

“I met with a Sufi priest twice a week,” Mubin told the audience. “He reminded us that when we read the Quran, we always say, ‘In the name of God, who is full of grace and full of mercy.’ And he asked us, ‘Before you do anything, do you do it with grace and mercy? If not, you’re not following the religion.’ He systematically debunked every idea I had. By the end, I became an adversary of my old self.”

After hearing their stories, Kiran remarked, “In both of your experiences there was this question that everyone, and especially teenagers, have. And that is, ‘Who am I? Who am I as I exist in my community, in this body, in this larger system and structure that I’m a part of?’ And that is where dialogue enters.”

After the panelists spoke, audience members broke into pairs to discuss subjects they have difficulty talking about with others, followed by a Q&A with the panelists. One person who identified as liberal and who has a gay child asked for advice on how to talk to her parents about their support of Trump.

“Something that has been very helpful to me personally,” Kiran responded, “is rather than framing the conversation around, ‘How could you be a Trump supporter, knowing what you know about me and about your grandchild?’ is instead taking a couple steps back and taking time to understand the why.”

“Maybe they’ll say, ‘I’m a Trump supporter because he’s a businessman, and I’m concerned about the economy.’ And so you can ask, ‘So why is that? Why do you care so deeply about the economy?’ and really try to peel back the onion, if you will. Because what makes dialogue so different from debate or a discussion is that you start to understand there are values, there are narratives, there are stories behind why people are making the decisions that they’re making.”

“Entering a conversation with that framing of stepping back,” she continued, “also causes them to step back. And then what they’re doing is having to ask themselves, ‘Why is that something I value? Is that something I’ve just been told to value? Is there a story that informs that?’”

Another useful tip Kiran told her was to name the discomfort in the room when having difficult conversations. “Pointing out that it feels weird, that it’s uncomfortable for you to tell your parents these things, and hearing that discomfort from your parents, is important. Because it’s about building trust, and it takes a lot of trust to do this work.”

Greg Barker, Seeds of Peace Manager of Facilitation Programs who attended the event, shared how talking with a stranger can make it easier to practice just that.

“There is this safety in anonymity with a stranger,” he said. “I can be vulnerable about what scares me so much because I don’t know you, and if you don’t like it, I can walk away. As I’m doing this, I’m building up my own resilience and my own courage so when I have a difficult conversation with, say, my family or friends, I’m more prepared and more able to deal with the things they say that hurt me.”

An "inspowered" kick-off to the 2019 GATHER Fellowship

What We’re Reading: Meet the “Others”