At the end of a rigorous day of dialogue, group challenges, and activities, the scene at an August Seeds of Peace program looked something like a modern-day John Hughes film: Scattered across a central lawn, small groups were talking, dancing, taking selfies, and sharing TikTok videos—seemingly typical teenagers were doing typical teenager things.

Looks can be deceiving.

Below the surface, there was little typical about MEET in Cyprus, a multinational dialogue program for Middle Eastern youth.

“I’m still processing it all,” said Lara, and Egyptian Seed. “I anticipated it would be big for me, but I can’t explain just how much this has given me something that I didn’t know that I needed.”

With 37 participants from Israel, Jordan, and Palestine, Cyprus, and Egypt, MEET in Cyprus marked the first Seeds of Peace multinational youth dialogue program in more than two years.

With twice-daily dialogue sessions, a special field trip, group challenges, and teambuilding work, the weeklong program was designed to deepen their understanding of conflict, of one another, and of their responsibility—and ability—to change its course.

It had the markings of the most impactful Seeds of Peace programs, but in many ways, was an evolution of how the organization brings youth together. Primarily, it was designed and led by Middle East staff and Cypriot alumni with regional culture at the forefront and built upon a year’s worth of work in Core Leadership Programs.

“At Camp, the youth came in a clean slate, whereas these kids had already done many months of work building their skills with their local teams, so they’re coming in at a whole different level,” said Claire Dibsy Ayed, Seeds of Peace Chief of Legal and Business Affairs, Palestine, and a lead organizer of the Cyprus program.

In a tour of Nicosia led by Cypriot alumni, participants saw checkpoints along the Greek-Turkish border and ventured within the ghostly quiet UN Buffer Zone. Walking amid bullet-riddled, abandoned buildings, they learned about the conflict and visited the Home for Cooperation, which works to bring together Turkish and Greek Cypriots. 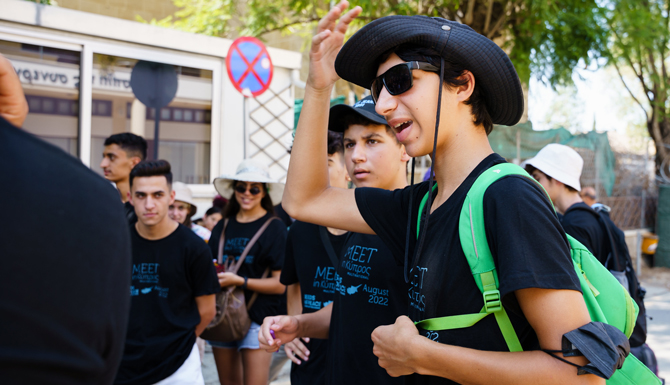 “It might not have hit them in the moment, but when they go home and see the things they talked about in Cyprus, and see similar versions of things they saw over there, that’s when it sinks in: It didn’t seem right over there, why is it okay over here?” said Jonathan Kabiri, Director of Israeli Programs.

Topics in dialogue sessions ranged from gender and human rights, to identifying with certain groups and national histories, to the impact of inherited memories, to challenging master narratives.

Outside dialogue, group challenges required them to practice what they were learning in dialogue—speaking from the “I,” working together, not making decisions for others, gaining consensus, to name a few.

Seeds like Adeem, a Palestinian citizen of Israel, described it as a supportive place to share their stories, to grow as leaders, and to better understand themselves and each other.

“At first I thought it was pointless, but I could see as dialogue went on that people started to understand me and the difficulties that I go through on a daily basis, and that it made other people understand my perspective I understood theirs,” she said. “I see how it could help us to have a more successful generation, and maybe not peace, but at least more understanding.” 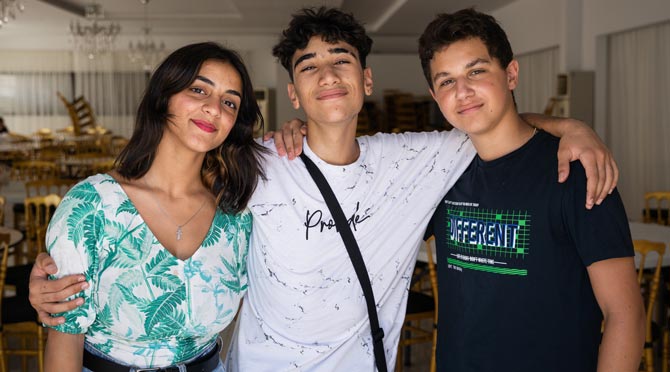 By the end of the week, many said they were leaving with a feeling of relief: to have gotten things off their chest, to have heard from others who share their struggles, and to learn that there are those on the other side who want to make change.

“This was an opportunity to widen the lens of what the kids see—to understand that there’s more to the struggle than their own reality,” said Monica Baky, an Egyptian Seed and Multinational Dialogue Programs Director. “It’s not so much about making friends, but building solidarity, understanding the nuance of this work, and inspiring a desire to continue.”

In fact, in a post-survey, the vast majority of participants said they felt more inspired to work for change at home after the program. “There is much more to do, much more to speak about, and much more to hear and be heard, and I’m looking forward to more meetings like that,” said Yaniv, an Israeli Seed.

“I came here to meet Israelis—to tell them my story and what I go through at checkpoints and living as a Palestinian,” Christina said. “I know there are others at my school who would be interested in doing the same, so that’s what I want to do. Talk to them about these programs and help them find their voice.”

“I hope I can create a safe space around my community to continue having these conversations, and to talk about the many problems we face in our country,” Lara added. “Like I said, this is something I didn’t know I needed, but hearing from everyone here makes me feel that I’m not alone. That other people thought this was just as powerful as I did.”