As Camp goes virtual, Seeds build skills and solidarity at a critical time

Somewhere between elaborate Excel worksheets, countless Zoom breakout rooms, spotty Internet service, and an unfettered desire to connect, it happened: Attendees to the 2020 virtual camp formed the transformative formula that is at the foundation of the Seeds of Peace Camp experience.

Across 13 time zones, dozens of Seeds from 12 delegations came together over the course of a week in August for virtual activities, workshops, and, of course, dialogue. It wasn’t the experience anyone had planned for this summer, but when COVID-19 led to the cancellation of in-person Camp in Maine, it brought a bit of Camp into Seeds’ living rooms, kitchens, bedrooms, and communities. 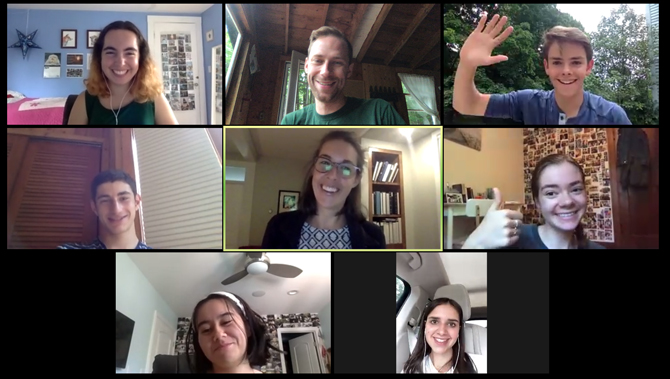 “Undoubtedly, the Camp experience can never be translated virtually; however, it provided me an opportunity of being in different realms at the same time,” said Emaan, a 2018 Pakistani Seed.

“While in the mornings I was learning my geographical identities and historical facts in online classes, in the evenings I was able to explore and understand the ideologies and mindsets behind them in virtual camp. I understood how everything is connected. It was like bringing my own realities at home and ‘the way life could be’ together in a unique way.”

There were nearly 60 Seeds who participated in the virtual camp, all of whom had previously attended Camp in the last three years, while new applicants for 2020 were invited to attend a Virtual Engagement seminar in July that gave them a taste of the Seeds of Peace experience.

Of course, there’s nothing like in-person Camp in Maine, but the digital version had its benefits: No barriers of cost or travel; no limits on participants; campers participated in multinational dialogue sessions; and the online nature allowed programming staff to design something that was nimble and responsive to what the kids needed in this moment.

“These are the young leaders of the next generation and we need to give them the skills, but they’re the ones working in their home environments and they know what they need,” said Interim Camp Director Clarke Reeves.

The week’s offerings were built from a survey that potential participants took earlier this summer to determine which topics and activities would resonate most. The responses led to options that included workshops on subjects like human-centered design thinking, and discussions on cultural and faith practices and race and privilege.

Seeds had their choice of eight optional workshops and social activities, and the most well attended were those that focused on skill-building and academic and career-oriented subjects. One such course was Conversations on Global Issues and Public Policy, which began with presentation by a Seed who is currently studying public policy in graduate school, and gave Seeds the opportunity to hear directly from graduate students working in the fields of Gender and Public Policy; Energy and Environment; Economic and Political Development; and Human Rights and Humanitarian Policy.

At the heart of virtual camp was the four-day Multinational, Cross-Camp Dialogue, which was themed “Building Leadership Through Solidarity” and included discussions on personal identity, gender, class, and race and ethnicity. They were, of course, abbreviated versions of what Seeds would have experienced at Camp, but for Seeds like Omar, a 2019 Egyptian Seed, they were still able to have a surprisingly significant impact.

“I didn’t think virtual camp would take all my time and energy and that it actually could be useful and educating,” said Omar. “But it improved my self confidence and my ability to communicate and speak in discussions and dialogue, which was most important for me because these skills are really needed in these times—especially if you’re leading change. Every time Seeds of Peace does something like this I always have that feeling that there is always good to do in this world and change to make and work for.”

There were challenges, of course: spotty internet connection, vastly different time zones, competing obligations at home, Zoom fatigue, and trying to replicate the chemistry of a Dialogue Hut—or even the magic of Camp’s Cafe Night or a dance party—is a lot more difficult to pull off online that one might expect. Actually, it’s probably exactly as difficult as one might expect.

But if there’s one thing that virtual camp proved, it’s the importance of finding ways to continue to connect, inspire, and develop young changemakers, especially when it’s difficult to do so.

“During isolation, a global pandemic feels big, scary, and everlasting,” said Elie, a 2018 American Seed. “Virtual camp has reminded me that I am never alone in the world. There are always incredible people out there waiting to unleash their powers and stand together in solidarity.”

Read more reflections from Seeds about the camp ››

Seeds of Peace names Josh Thomas as next Executive Director