With just two weeks to make his moves, Kamal, a 2015 Palestinian Seed from Gaza, wasn’t about to miss an opportunity.

Always quick to ask a question, connect on LinkedIn, offer a resource, or to squeeze past crowds to meet a legislator, the 23-year-old entrepreneur and human rights advocate came to Global Institute—an advocacy and policy intensive for Seeds ages 18-25 that kicked off July 13 in Washington, D.C.—on a mission: build as many connections as possible. 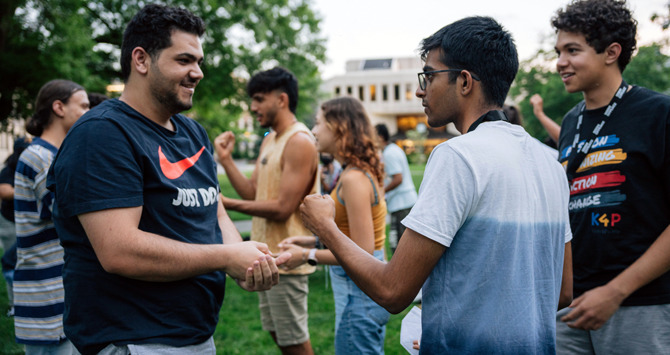 From the 41 peers in the program, to Seeds of Peace staff, from legislative aides to legislators—anyone with a business card or a LinkedIn profile could one day bring him closer to his goals of building a more peaceful and equitable future for people in the Middle East, particularly Gaza.

Today, he lives and works in Saudi Arabia, where he opened a business that connects investors from areas of conflict in the Middle East as part of a goal to build bridges through economic integration. It’s work that’s not entirely unfamiliar—his father worked with Israelis for decades—but one that he said was very much affected by his decision to come to Seeds of Peace Camp in 2015, and especially by returning as a PS camper in 2016.

“Growing up in Gaza is like growing up in a prison. As a kid, I always watched movies and wondered what life could look like outside the Gaza Strip,” he says.

He heard about Seeds of Peace from a friend and saw an opportunity to see another part of the world.

“Suddenly, I was in the U.S. meeting people from different communities, people from the other side of the conflict for the first time in my life. And I was really shocked that they didn’t hate me all the time, that there were people who love me, who really wish a better future for me and other generations. It really, honestly, changed my life.”

He says his two years at Camp inspired his decision to major in human rights and law in college. There, he became involved in several organizations that advocate for human rights in Gaza, including founding the Federation of Law, a group for Gazan students that advocates for women’s rights.

After college, he moved to Saudi Arabia and opened his business as an avenue to make greater impact. He hopes to build an environment where people can see one another beyond the conflict—“to find a place where, at least, we could call it peaceful, in a way that could really affect other generations and their families.”

“When I speak about peacebuilding, that means economic enhancement, women empowerment, equal access to resources, basically, we’re trying to help the people in Gaza and West Bank live the life Israelis live in Israel. And having a better life means the country could be enhanced in the future and could be open to more prospects, but we need to start. We need to stop the drain that’s happening, the drain of land the drain of people, like, killings every single day, and we need to start to step forward towards peacebuilding. That’s what I want.”

He says his work and his views about peacebuilding are sometimes met with skepticism within his community, even within his family. But he’s not deterred. He’ll keep hustling. Keep having difficult conversations, making connections, and building bridges.

“I believe in peace. Without peace we cannot live. Just imagine living in a prison; would you live in a prison? Of course not. And that’s Gaza, that’s Israel. People in Israel, even if it’s a good country to live, they really don’t feel that it’s the healthy life they need. So they’re always threatened, it feels unstable, and it’s not a healthy environment to grow up in. So, my internal belief that I deserve a better life, and that my friends and community really deserve a better life—that’s why I work hard. It’s not only for me, it’s about my community.”

How far will one Seed go to educate Afghan’s youth? As far as it takes