When Rukmini was a young girl growing up in Mumbai, she mostly thought of the word “peace” in the context of beauty queens and would-be saints: Miss Universe talked about the need for it, Mother Teresa gave up everything for it, but what, Rukmini wondered, “did that mean for someone like me, a lay person who has conflict at home?”

Her personal inquiry deepened with time, leading her through several peacebuilding programs in high school and, eventually, to college where she attended an interfaith dialogue session hosted by a Buddhist group. What she experienced there, she said, left her “awestruck.”

“I came from a family where my parents are extremely religious and caste-ist, and I knew I wanted to fight that but didn’t know how to in terms of having the emotional and psychological safety to voice that at home,” she said. “So to me, it was such a relief to learn that these spaces can exist that can allow for processing and talking about my own faith (or lack thereof).”

Having built a career in peacebuilding and corporate leadership development, Rukmini has actively practiced dialogue for most of the past decade—including as a Seeds of Peace Delegation Leader and Educator, and this spring, she’ll be one of four trainers leading The Samvaad Project, a new Seeds of Peace interfaith-dialogue facilitation training program for university educators in Western India. She has seen what happens when people have safe spaces to explore their beliefs and differences, and sees dialogue, particularly for young people, as a critical ingredient in building peace.

“In the world we live in, I don’t think it’s an option any longer,” she said of dialogue. “It’s essential.”

She spoke recently about The Samvaad Project and how educators can play a key role in providing safe spaces for youth to explore their beliefs through dialogue, just as she did as a student.

Seeds of Peace: It seems you were thinking about peace and conflict from an early age. How did that translate into action for you?

Rukmini: It’s all about context, right? When I was growing up, Mumbai was filled with gang wars and there was a lot of violence. I remember once, I was probably 21 or 22, I was on a train and there was a bomb blast in another compartment. The train halted, we all quietly jumped off the train, and calmly walked to the next station. While I moved on that day, there was something wrong about it in terms of, how can we just go on?

Those kinds of experiences intensified this relationship with conflict—that something about it doesn’t make sense and we need to work at it. And when I say “we” need to work at it, I mean common people. It can’t be something just left to governments or UN agencies. We need to have lay people working on conflict resolution.

What role do you see educators playing in creating cultures of peace?

Adolescence or early adulthood is when people are thinking about the kind of impact they want on the world, and I think it’s the right time for us to introduce people to personal responsibility towards the collective and how they can contribute to peacebuilding.

And peacebuilding is something that can be integrated into pretty much everything one does—into law, government-related work, design and architecture—it’s a way of life, and a way of sensitizing us to the fact that conflict exists in us and around us. If you’re able to integrate that concept early in our lives, then there isn’t as much resistance to it later in life, when one is faced with conflicts.

Given the kind of influence that educators have and the opportunity that they have to create conversational spaces in their institutions and in their communities, there’s so much that can be done. There aren’t enough safe spaces to talk about faith at the moment, so even if you’re able to even marginally increase the amount of safety, that will be work well done. 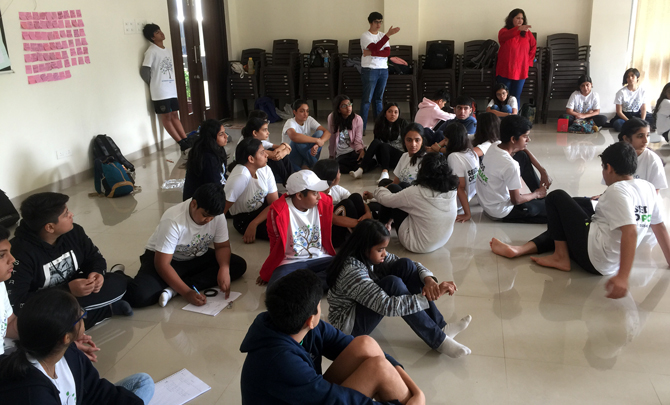 How does interfaith dialogue contribute to lasting peace? Can it be achieved without it?

Dialogue—interfaith or otherwise—is crucial. There are so many divisive elements all around, online and offline, and the only way to counteract that is dialogue: to sit across and talk about what’s your story, what’s my story, and how do we build our collective story and a shared future.

Why was this important to be centered specifically on interfaith dialogue?

First, because of the times that we live in, there’s a lot of propaganda around faith in every form. Second, because a lot of elements of faith are so unconscious to us. And because we’re often not really aware of the privileges we carry, we sometimes mete out unfairness without knowing it. So it’s really important to bring that into conscious awareness and start working with it, otherwise we end up perpetuating structural violence without even knowing it. 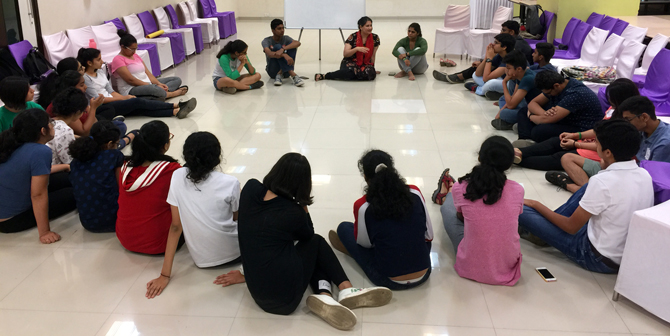 What if a person is not religious, will this course be useful to them?

Yes, that’s also an aspect of faith. If I’m agnostic or an atheist, that’s still my faith, and I still need to live in my community, family, my society where people may practice other forms of faith and they may want to be respected for their expression of it. And so my being non-religious may have an impact on them just by being what I am. At the end of the day, the fact that we are human and belong in society is reason enough for someone to do this work.

What can participants expect from the program?

There’s definitely a skills component in terms of how to facilitate dialogue, to handle sensitive conversations, to manage it when things get heated up, and so on. But a lot of the work is also inner work, which will definitely take participants outside their comfort zone, and that’s also the intention—that as educators, we need to live the process to be able to educate others around it.

It’s not always comfortable, but I would still say it’s rewarding because you see changes—particularly when you work with young people. You see how their world view changes and how much more expansive they become as a result of dialogue, and that’s worth everything.

What do you hope people will do with this course?

I hope they generate conversations around faith in a safe way, wherever they are. Even if they generate one question or reflection in their inner circle, that’s good enough impact for me.

Learn more about the Samvaad Project or submit an application ››

Rukmini is a seasoned leadership development facilitator, coach, and peacebuilder with over 19 years of professional experience around the world. She is certified to use a wide variety of approaches, including conscious and unconscious human process work, whole systems thinking, Appreciative Inquiry, Non-Violent Communication, and Neuro Linguistic Programming. As a Rotary Peace Fellow, Rukmini is a trained peacebuilder and conflict resolution specialist and channels her work in this area through her peacebuilding platform The Womb Tales. She has a Professional Development Certificate in Peace and Conflict Resolution from Chulalongkorn University, Thailand, and a Master’s degrees in Organizational Psychology and Bachelor’s degree in Commerce from the Mumbai University. Her publications include ‘A Culturally Sensitive Approach to Engage Contemporary Corporate India.