In their hometowns, on farms, and even ‘islands,’ Middle East youth dig deeper

With the launch of Israeli, Jordanian, and Palestinian Core Leadership Programs (CLP) in August, the fall has been about digging deeper: deepening youth’s understanding of their identities; their relationships to their communities and to one another; and their understanding of how to use tools like dialogue to grow as leaders who can make change locally and engage in impactful ways globally.

In Jordan, participants in the year-long RISE program met twice: On September 23, 36 youth attended “Islands of Sanity,” which aimed to create spaces for emerging young leaders to reclaim social sanity and push for solidarity across lines of difference amid deep divides and polarization in Jordan. And on Oct. 29, “To the East” brought together 32 youth for a workshop that included indoor rock climbing and focused on understanding social tensions using social constructionism theory, which tries to explain the intersectionality between identities, stereotypes, and exclusion.

In one exercise in September, youth were divided into eight groups and “dropped” on an imaginary deserted island. Tasked with choosing one item they would bring to sustain them until rescue crews arrived, Farah said a highlight came when three of the groups chose items that would help them establish new communities where justice and equality prevailed, rather than abandoning the island.

“I tend to think that at the heart of every leader is a desire to create a utopian paradise,” Farah said. “That is what our young leaders have in their hearts.” 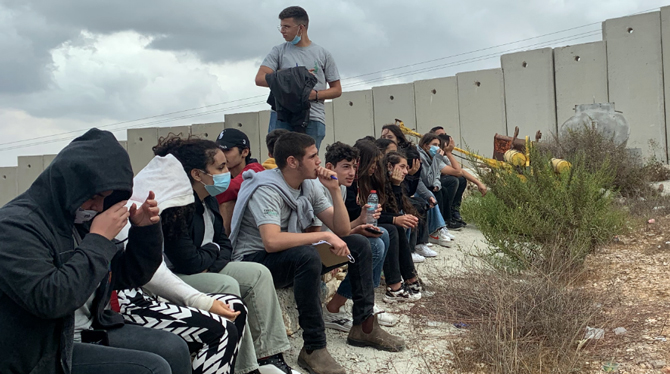 The Palestinian CLP, titled بصمة (or Bassmeh, which is Arabic for imprint or mark), held its second overnight seminar on Sept. 23-24. Focusing on systems of power, injustice, and privilege, the seminar allowed participants to discuss the concepts in a series of workshops, and then to see and discuss real-life examples of those concepts in a geo-political tour of Bethlehem.

On October 15, more than two dozen participants again met in the West Bank village of Battir for “Plant Palestine.” Working with a local villager, they learned agricultural techniques and local traditions associated with the olive harvest, as well as struggles the farmers and villagers face as a result of Israeli occupation and ongoing threats from Israeli settlers, including the burning of fields of vegetables and olive trees—a crop that is economically and symbolically significant to the Palestinian collective.

“We always say our roots are in the land—steadfast and resilient as the olive tree, which can endure even the most difficult challenges and still bear fruit,” said Antwan Saca, Director of Palestinian Programs. “With our youth coming from vastly different places across historical Palestine, it was a chance for them to give back to the community, to take responsibility and action, and to connect to a piece of their identity that they all share as Palestinians.”

The Israeli Seeds of Peace programming team hit the highway in the month of October for a three-week dialogue road trip, traveling approximately 2,000 miles and facilitating some 60 hours of dialogue in the home communities of 2021 Israeli CLP participants.

The road trip, which includes meetings in the Haifa, Sharon, Tel Aviv, and Jerusalem Districts, as well as Ashqelon and the Southern regions, has both practical and symbolic value, said Jonathan Kabiri, Director of Israeli Programs and a 2011 Israeli Seed:

“We believe those conversation about the local context of the conflict are important to be had in their most safe and supportive place—where they live and among Seeds who are neighbors,” he said. “But it is also symbolic in that, rather than doing as in years past and sending them away to America as a first step in this journey, we are signaling to them that this can begin right here, right now in their communities, and we will even come to them to support that first step.”

Seeds of Peace Core Leadership Programs were launched in 2021 in Israel, Jordan, Pakistan, Palestine, and the U.S., each uniquely tailored to focus on the needs and challenges of the individual countries, while providing all participants with a common set of skills and language around dialogue and changemaking. From 2021 forward, these programs will be the entry point to Seeds of Peace programming for the majority of youth, and will prepare them for deeper engagement and multinational programs such as Camp. Learn more about our Middle East programs ››

A Force of energy with a heart for humanity: Pooja Pradeep named GATHER International Director