While COVID-19 continued to play a role in the ways in which our young leaders came together this winter, these dedicated and courageous youth showed up in-person and online to share their voices, explore new concepts, and work toward building the kind of future they want to see. 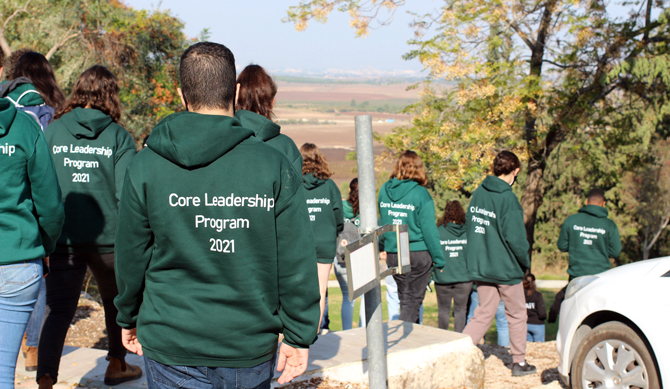 After more than 50 hours of programs, including 30 hours of dialogue, 30 Israeli youth officially became Seeds in November.

They were the first Israeli graduates of the Core Leadership Program—the new regionally based starting point for all Seeds as of 2021. Together, they gained skills in community building, action taking, and using dialogue as a tool for change. Hailing from communities stretching from the north to the south of Israel, they explored the varied realities that their peers face on both hyper-local and national levels.

“This year I realized that we don’t have to agree with each other, but we have to understand each other, and to accept other opinions that are not like mine,” said Eldad, a participant.

November also brought the close of the 2021 Teen Leaders program—a new program in which 10 Israeli Seeds who attended Camp in 2019 received advanced leadership training and an introduction to dialogue facilitation while supporting their younger counterparts in the Core Leadership Program.

“Connecting all those realities and stories leads to a much deeper understanding and willingness to explore and tackle issues on larger scales, while helping youth make an immediate impact in their communities,” said Jonathan Kabiri, Director of Israeli Programs and 2011 Israeli Seed.

The 40 youth of RISE—Jordan’s Core Leadership Program— have been busy this winter with trainings that expanded their views and enriched their skills for bringing about change at home and beyond.

A rock-climbing activity in November provided a gateway for participants in the year-long program to explore, identify, and, ultimately, to defy issues like stereotyping and exclusionary social constructs that can hinder creating more just and inclusive societies. In January, the youth completed “From Gandhi to Floyd: Non-Violent Resistance and Social Movements,” a two-month training aimed to inspire and empower youth to create personal transformation and social impact with nonviolent tools.

And most recently, in February, participants were introduced to an effective, structural process for reaching creative solutions to social problems in “Stronger than all the Armies: Design Thinking and Innovation.” Using the five modules of Design Thinking—empathize, define, ideate, prototype, and test—the youth identified real problems faced by their communities (including living in poverty, drug addiction, unemployment, and sexual harassment) and together, honed ideas for solutions.

Their views sometimes diverged in the latter phase, said Jordanian Programs Director Farah Bdour, but “the enthusiasm, commitment, bright and innovative ideas that came out showed that Jordan has one thing stronger than all the armies of the world: its innovative youth!”

K4P-Jerusalem youth look beyond the surface and to the future

Two in-person gatherings provided bookends to a series of meaningful programs for Kids4Peace participants this winter. Before COVID-19 restricted their ability to gather, K4P youth came together in December for an overnight seminar that centered on challenging and overcoming stereotypes. Together, the 21 Palestinian and Israeli youth, ages 12-13, learned the importance of looking beyond the surface, and deepened their friendships in the process.

The new year kicked off with a virtual program focused on using their voices to make change by learning skills to deliver impactful speeches. The following month, in early February, youth had the chance to meet virtually with Omri, a Palestinian alumnus of Kids4Peace who, at just 20, is making an impact through his love of photography and storytelling. (See his work at instagram.com/omrimassarwe.) He shared how he kept pushing to pursue his passion, even when doors seemed to close for him, and encouraged the youth to do the same.

“I want you always to stay curious, to keep this little idea in your mind and find the answers for whatever is your passion,” Omri told the youth. “Be the captain of your own destiny.”

Later in the month, 15 Israeli and Palestinian senior youth from East and West Jerusalem gathered for a program exploring the roles that art can play in forming national and personal identities.

After discussing the iconic images of Srulik and Handala—drawings by Dosh and Naji al-Ali that often represent Israeli and Palestinian identities in both the popular imagination and in protest—participants drew a picture of how they would choose to represent their national story today.

“When we made a gallery of all the kids art at the end of the program, the kids all noticed that no two pictures were alike, representing the diversity of what it means to be Israeli and Palestinian as a youth in Jerusalem today,” said Ittay Flescher, K4P-Jerusalem director. “Some of the images also expressed deep pain about the injustices that exist, which was very moving for everyone to see.”

Speaking up and leaving a mark in Palestine

“In Bassmeh, I learned to not turn a blind eye when there’s something wrong going on, but instead speak up and be active,” said Malak, a participant in the first Seeds of Peace Palestinian Core Leadership Program, titled Bassmeh بصمة (Arabic for “imprint”).

Since August, Bassmeh’s 28 courageous youth from across historical Palestine have taken part in geopolitical tours and awareness-raising workshops, worked with farmers to replant trees on land threatened by Israeli settlers, explored personal and collective identities within the Palestinian community, and examined the systems of power enforced on them by the occupation. For Malak and his peers, it has been a chance to better understand their voices as leaders, as well as Palestinians.

“Having a safe environment to be able to discuss different issues was the perfect setting to reconsider what I thought I knew about the world and to understand the amount of injustice there is.”

Now that they’ve crossed the halfway point of the program, the cohort will soon have the practical skills in dialogue, community building, nonviolence tactics, and collective action-taking to begin building a more hopeful future.